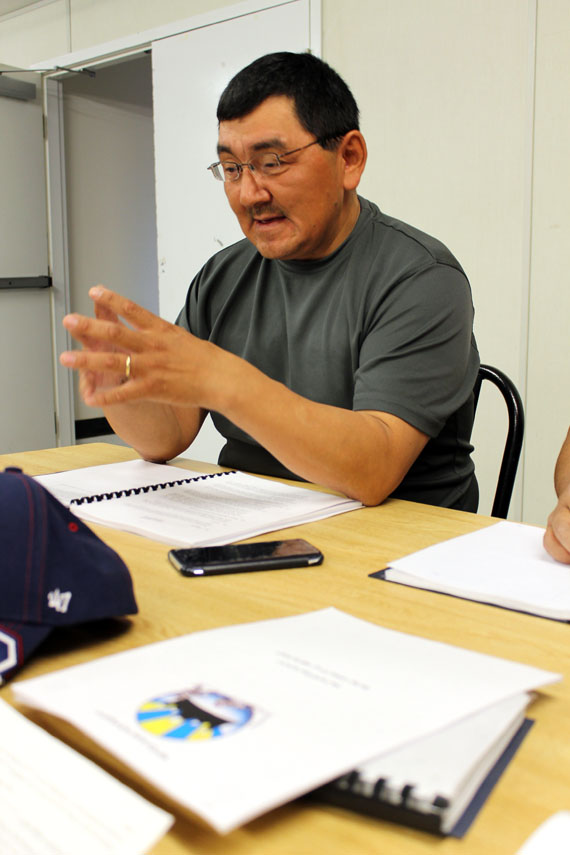 Qikiqtani Inuit Association President Olayuk Akesuk spoke with Nunatsiaq News about the recent funding of the Qikiqtani Truth Commission’s report and recommendations. He said it was important that the funding for the report be used to implement the 25 recommendations over the next 10 to 20 years. (Photo courtesy of QIA)

He confirmed this in an interview with Nunatsiaq News after QIA received the second installment of agreed funding from the federal government last week.

However, he added, some of these recommendations will be implemented more quickly than others.

Akesuk used the example of the third recommendation, where the QIA and the RCMP must recognize the contributions of Inuit special constables.

To do this, a monument was erected in front of the Iqaluit RCMP headquarters showing an Inuit special constable harnessing his qimmiq, an Inuit sled dog.

The Truth Commission was created by QIA in 2007 to document the damaging policies and actions of the Canadian government and the RCMP against Inuit in the Arctic from 1950 to 1975.

Harmful policies imposed on Qikiqtani Inuit during this 25-year period include forced relocations and the killing of qimmiit by the RCMP.

“We want to make sure that people who have been and are still affected [by previous government policies] heal,” he said.

He added that QIA wants to ensure that the programs it offers help those who are still in the healing process 50 to 60 years later.

On October 7, QIA confirmed that it had received $25.75 million from the federal government for the second tranche of funding for the final report and recommendations of the Qikiqtani Truth Commission.

On the same day, the QIA announced that the Government of Canada had committed to commit additional funding for the commission’s report, through an addendum to the original memorandum of understanding.

The Qikiqtani Inuit Association is requesting $31 million for this final investment.

Programs currently being developed or instituted by the QIA include the distribution of Inuktitut early learning materials, sponsorship of the Nunavut Quest dog sled race, and the organization of healing gatherings.

With the lifting of COVID-19 restrictions, some programs have also been easier to implement, Akesuk said.

He used the example of the Nunavut Quest dog sled race which was held again after a two-year hiatus during the pandemic.

For the final investment, the $31 million sought by the QIA is currently going through the federal process, Akesuk said.

“I think it’s important that we use this money to ensure that these 25 recommendations are implemented over the next 10 to 20 years,” he said of the latest installment.

The Department of Crown-Indigenous Relations and Northern Affairs Canada is currently reviewing the QIA’s proposal for a final investment, department spokesperson Nicolas Moquin told Nunatsiaq News in an email.