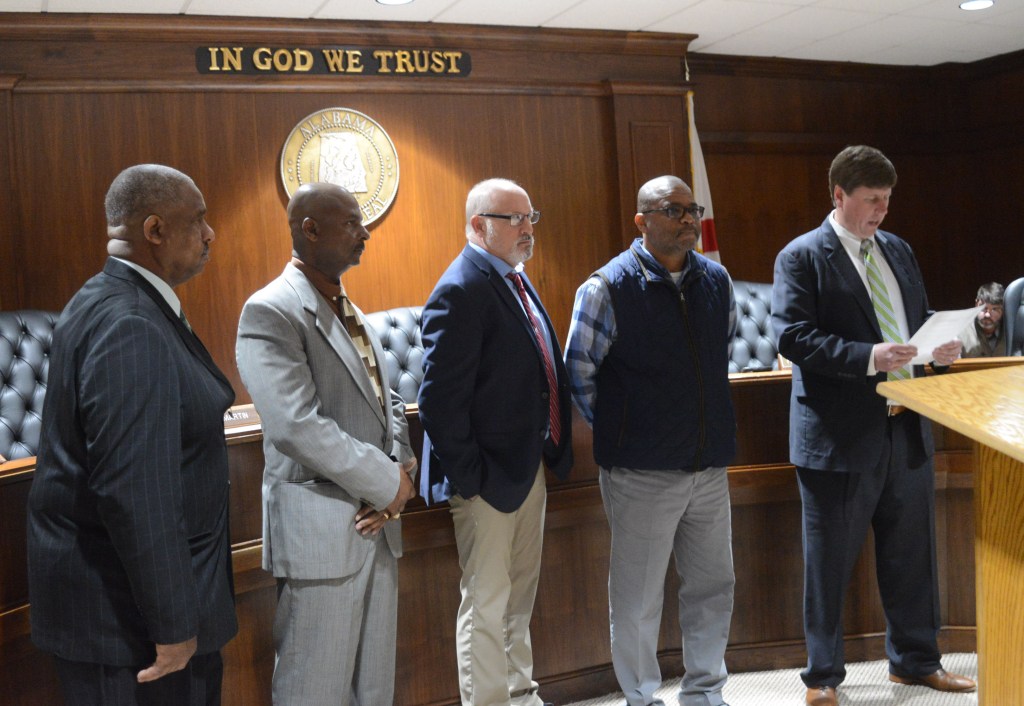 The Marengo County Commission began its March meeting with the presentation of a resolution honoring the late Commissioner Freddie Armstead, Sr. Armstead died Feb. 9 of an accidental gunshot wound after returning from a hunting trip .

Armstead served as Marengo County Commissioner for 36 years during which he generously gave of his time, experience, and talents for the benefit of all citizens of Marengo County. He was instrumental in establishing the Marengo County Economic Development Authority (MCEDA), along with the Demopolis Industrial Development Board and the Linden Industrial Development Board to support and maintain trade and commerce. industry in the county. Commissioner Jason Windham presented the resolution to Armstead’s son, Freddie Armstead, Jr.

Louis Hines with the State of Alabama presented the proposed final plans for redistricting. He said there were no changes to Districts 3, 4 and 5, and only small changes were made to Districts 1 and 2. The Commission agreed to announce a public hearing on the changes at the April meeting.

Kayla King approached council to receive permission to use the kitchen from the Commissioner of the Economic Development Center. At a previous meeting, King of Clayhill Farms and Gardens, requested the use of the kitchen three days a week to prepare food for distribution around the county via a food truck.

At the March meeting, she asked the Commission for an extra day per week of kitchen access, making their Thursday-Sunday use days three weeks each month. King emphasized that food would not be served in the kitchen, that they would use minimal storage space, and that their use of the kitchen would not conflict with others who need to use the space for other events. The commissioners filed the application until the next meeting to allow time to review the lease.

Darryl Maguire of New Day Ministries also asked the Commission to use the former National Guard armory for a new faith-based program that aims to cross racial tensions and reduce tensions. Services are scheduled for 9 a.m. on Sundays to avoid conflict with other churches in the area. The first event is scheduled for May 1 with services held on the first Sunday of the month for three months, then will move to a weekly schedule.

The Commission passed a resolution regarding the one-cent sales tax for the benefit of county school systems. Linden City Superintendent of Schools, Dr. Timothy Thurman, said the Linden school system is close to getting money to turn the former Fun Factory property into a new high school.

The Reverend Jesse Moore appeared before the Commission and reported that a contractor is set to begin building storm shelters as soon as the Commission determines permanent locations. Moore said the Moore-Wright Group will ensure payments are made as this is a private project rather than a county project.

Probate Judge Laurie Hall indicated that approving the elimination of the constable’s office may not be discussed in the Alabama Legislature this year. Hall said she would work with Rep. AJ McCampbell on when to submit legislation for a special session or the regular session in 2023.

Hall also said the freeway on-ramp. 43 voting site must be repaired before the primaries in May. An offer from one company has been received and they are awaiting another offer from a second company. She had two weeks to secure the second offer, but authorized President Terry Hinton to approve the first offer if necessary.

Other points discussed by the board: