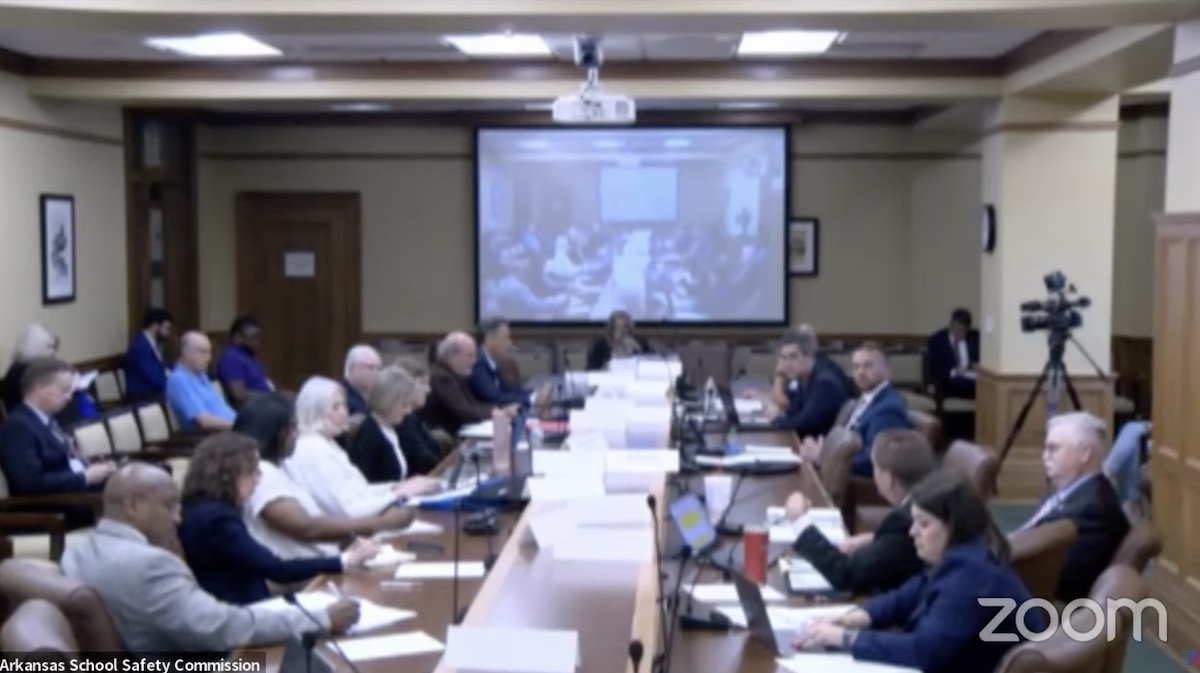 The Arkansas School Safety Commission takes a further step today towards the submission of an interim report to Governor Hutchinson and mentioned a range of ideas from improving access to student behavioral data to solving an outdated state law on school gates.

Cheryl Maichair of the commission, reminded the panel that her interim report is due on August 1.

May suggested the report should include new recommendations and go back to the 30 recommendations made by the panel in 2018 and identify those that have not been implemented.

“Interestingly, there’s very little that hasn’t been ‘realized,’ which is really great,” said May, director of the University of Arkansas Institute of Criminal Justice.

The panel plans to do another statewide school safety assessment and is considering questions to include in that survey.

Another committee member noted the need to address Arkansas AR Code § 12-13-109 of 2017, which requires teachers in public and private schools and all educational institutions to “keep all doors and exits unlocked during school hours”.

It goes against “everything we try to do here,” the commissioner said.

Member of the Commission Lori Postonvice president of clinical services for the Northeast region of Arisa Health, said a statewide mechanism to allow anonymous reporting of school threats would be particularly beneficial — an idea that has gained ground in recent meetings.

May and commission member AJ Garydirector of the Arkansas Division of Emergency Management, seemed particularly impressed with the safety audits conducted monthly in the Bentonville School District and thought the effort could be a model for other districts.

The security manager has “created a culture of security,” Gary said. School employees are always on their toes as they are still awaiting an audit, Gary said.

During the nearly two-hour meeting, commission members unsurprisingly avoided mentioning a deadly mass shooting in Illinois on Monday that left seven dead and scores of others including a high school marching band, in danger.

The committee seems to have an aversion to addressing the issue of guns, the common factor in every mass shooting.

Surely the Arkansas School Safety Board could learn something from the facts of the July 4 shooting in the upscale Chicago suburb of Highland Park? Or is Arkansas going to require Arkansas students to never march in a parade, never score a touchdown, never swing on a playground, never leave school buildings nominally protected by locks, cameras, bulletproof windows and armed officers?

Here are some facts the commission could have reflected on, but did not:

* The suspect in the Highland Park shooting bought his gun legally. Arkansas lawmakers like to regulate things like recreational marijuana and even the bodies of pregnant children, but not guns, never guns.

* It was an AR-15 that the Illinois suspect used to fire more than 70 rounds. It’s not the kind of weapon you need to hunt deer or duck. It’s a killing machine that’s perfectly suited for a mass murderer, whether in a school, church, or grocery store.

* It was only last month that State Sen. Joyce Elliott (D-Little Rock) reminded her fellow lawmakers that school safety is inextricably aligned with our communities because that’s where the guns come from to fire and shooters, not Mars. Elliott’s expertise? She is a retired teacher.

The committee today heard presentations on the available data from two men from the Cybersecurity and Infrastructure Security Agency of the US Department of Homeland Security. The panel also heard from Hope Worshamdirector of the American Rescue Plan’s Elementary and Secondary School Emergency Relief Program in Arkansas.

Worsham said the program has already provided training to 110 leaders representing 93 buildings and 53 school districts and plans to reach out to more starting this fall. Among the program’s offerings, which aim to improve student behavioral and mental health, are SmartData dashboards that bring together data on all students in one place, making it easier for school employees to see if a student might start exhibiting a pattern of problem behavior — or even to see if a teacher might discipline black students more than white students.

Worsham said 70 to 80 percent of school districts in the state have been trained to use the program. Some, but not all, of them use it and “have found it helpful” in identifying students with warning signs of behavioral problems, she said. The program, which is free for districts up to age three, includes a “risk index” that places students’ risk levels from one to six.

The commission wants to continue to add to the duties of principals, teachers, principals and counsellors. But forget the salary increases that must accompany the extra work. After all, we are just a poor state with a $1.6 billion surplus for the year. So why help the underpaid and overworked?