Covington Commission not getting recommendation on demolition contract from IRS, hope to get it soon 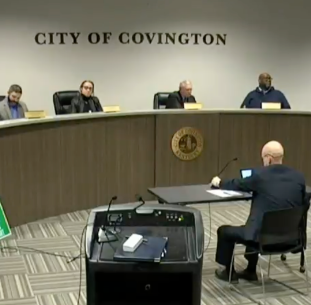 Not quite yet. This is the message on the demolition of the IRS site.

Covington City Manager Ken Smith told commissioners last week that the city was close to reaching an agreement with O’Rourke Wrecking Company to demolish the IRS site. After issuing a request for proposals in late November, the city reviewed four proposals for the eight-month project, Smith said.

They expected to see the deal Tuesday night at their regular legislative meeting.

Instead, Smith told commissioners on Tuesday he was unable to complete the deal, but Mayor Joseph U. Meyer suggested they might be able to complete it by the time the council meets. caucuses next week.

The scenario would look like this: they would have to take action on one item during the meeting (where they would otherwise only discuss orders and possible resolutions), then they would come back to caucus and continue their discussions.

“Could we maybe do that, so we don’t have to wait another two weeks?” asked Mayor Meyer.

Smith said he would try to do so.

There was good news and bad news when the city heard this year’s audit report.

Good? There was really only one area of ​​improvement, compared to previous years when there were as many as five.

The bad? It’s been a concern since 2013. It involves city transfers — they don’t add up and it’s something Mayor Meyer has admitted needs to be fixed.

Yet there were other quirks in the audit report. Mayor Meyer wondered about three in particular:

• A $500,000 variance in the finance budget (which may be due to the IT department being placed there in the audit report instead of the administration it belonged to),

• A report of $9.5 million in assets located in the parking authority account – where the mayor says there shouldn’t be,

• and the occurrence of over $5 million in health insurance account premiums.

The city agreed to work with its independent auditors to remedy the situation and continue to sort out the irregularities in the report.

Commissioners approved a new agreement between the city, state, Department of Criminal Justice Training and the Kentucky Law Enforcement Council to participate in the Skillbridge Military to Law Enforcement program.

City officials said Covington would save up to six months in training time and $18,000 per officer.

The curators approved extensions to the Steetscape project for:

The winners of the Mayor’s Holiday Reading Contest have been announced.

The five grand prize winners are:

The students won a prize including a personalized iPad. Contest participants read 16,798 books between November 21 and December 31.

After the meeting, the commissioners convened in executive session to discuss what the mayor called “an economic development plan.”

He said no further action would be taken.

The next regular meeting of the Covington Commission will be a caucus meeting to be held at 6 p.m., February 1, at the City Building at 20 W. Pike St. in Covington. The meetings can be followed live on Fioptics channel 815, Spectrum channel 203, the Telecommunications Board of Northern Kentucky (TBNK) website, TBNK Facebook page @TBNKonline and TBNK Roku channels.