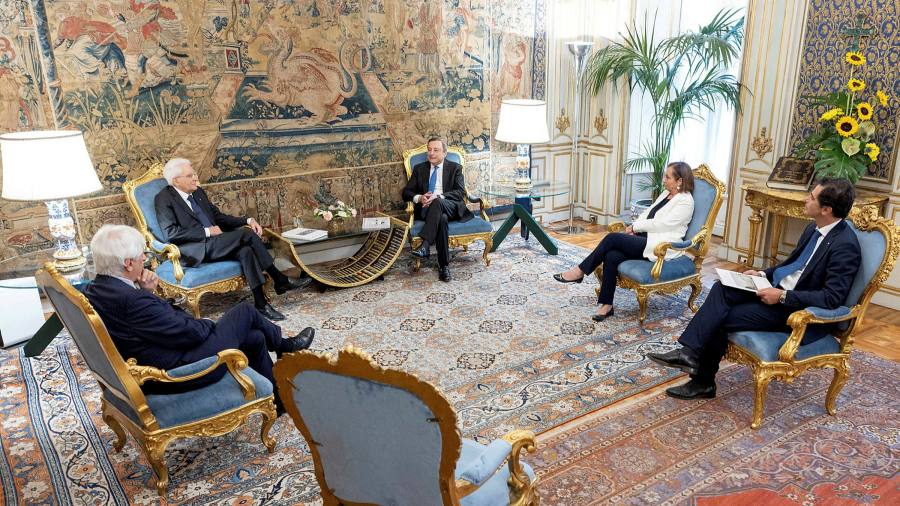 Governments and investors across Europe are trying to piece together what the collapse of Mario Draghi’s government will mean for the EU’s €800 billion Covid recovery fund – of which Italy is the main beneficiary.

The fund is the EU’s most ambitious joint economic project since the birth of the euro, bringing member states together to secure the issuance of common debt by the European Commission on an unprecedented scale. Italy alone has received 200 billion euros in EU funds, seen as vital to reviving the country’s chronically underperforming economy.

Like the other countries, Italy has agreed on an ambitious timetable of reform steps and investment targets to unlock tranches of EU money. But a premature election campaign casts doubt on the country’s ability to meet this year’s deadlines – a concern acknowledged by President Sergio Mattarella when dissolving parliament last week.

“There are crucial deadlines,” Mattarella warned. “I hope that, despite the usual campaign tones, everyone will make a constructive contribution.”

But with elections scheduled for September 25, questions remain over whether Italy can meet its reform milestones set for December 31 to receive an additional 19 billion euros, or around 1% of gross domestic product. Necessary measures include the adoption of a new competition law, tax reform and an overhaul of court procedures to speed up trials which are the slowest in Europe.

“This leads to a busy schedule of legislation in normal times, not to mention elections,” said Ludovico Sapio, economist at Barclays Bank.

Goldman Sachs analysts said in a note on Monday that they see “significant headwinds” for Italian debt due to heightened political uncertainty and potential delays in implementing investments and fund reforms. RELAUNCH.

Commitments made by Italy in exchange for funds include cutting red tape, boosting competition in sectors ranging from energy to transport and strengthening public administration. They are designed to improve long-term growth prospects and ensure the sustainability of its public debt, currently around 150% of GDP.

Although Draghi, the former president of the European Central Bank, has won cross-party support for the plan at the helm of his unity government, there are fears that implementation will falter without him, undermining reform momentum. and fiscal discipline.

“Draghi played a vital role,” Sapio said. “With his premature departure, we now face uncharted waters. We are moving from a scenario with a Prime Minister with a large parliamentary majority – and a strong commitment to the plan – to a completely unknown new framework.

Giorgia Meloni, leader of Italy’s far-right Brotherhood, which polls suggest could be the biggest party in parliament after September’s elections, told La Stampa newspaper over the weekend of her concerns about the fact that the recovery funds were not used in areas where “Italy is more competitive than the others”.

Yet any significant disruption or deviation from the reform and investment agenda, set out in a 664-page annex to Rome’s deal with the commission, would jeopardize Italy’s full access to the funds.

Italy would not be the only victim. Although the fund was agreed as a one-off measure in response to the pandemic-induced economic crisis, proponents of deeper European fiscal integration see it as a potential precedent for further joint action. If the system collapsed in Italy, it would increase skepticism in northern European capitals which are deeply suspicious of joint debt issuance.

“The whole idea of ​​joint borrowing by the EU is at stake here,” said Luigi Scazzieri, senior researcher at the Center for European Reform think tank. “The fund’s perceived success or failure hinges on whether it succeeds in Italy or wastes it.”

Some Italian analysts say a new administration has strong incentives to buy into the plan or face public anger for not getting the funds.

“The path has been clearly defined,” said Luciano Monti, professor of politics at Luiss University in Rome. “We signed a contract. . . and will receive a lot of money: 20 billion euros each semester. It’s a good carrot.

The ECB last week raised the stakes even higher for Italy, saying adherence to EU stimulus packages would be taken into account when assessing a country’s debt eligibility. to its new bond buying program. This Transmission Protection Instrument, or TPI, is designed to counter unwarranted increases in domestic borrowing costs.

The yield spread between Italy’s 10-year debt and Germany’s, a key measure of risk, has widened to around 2.3 percentage points since Draghi’s government began to falter . The so-called gap registered around 1.85 percentage points in early July.

Michele Geraci, a former undersecretary in Italy’s economic development ministry, said any centre-right coalition government – the most likely outcome in current polls – would remain committed to the plan and may even seek to improve it. “Reform and a more efficient economic system are in the centre-right’s DNA,” he said. “The recovery plan could even be improved.”

Still, Brussels has discouraged member states from trying to renegotiate and retains discretion over how to respond to such requests or any non-compliance with milestones.

Nathalie Tocci, director of the Institute of International Affairs think tank, said Draghi’s exit deprived Italy of an effective advocate in Brussels, which could affect how the committee viewed developments in Rome.

The outgoing administration was “the first time we had a government with the credibility, leadership skills and reputation to get good deals for Italy in the EU”, she added.

“Given the way the economy has changed, those waters would have been rougher to navigate. To navigate them well, you have to know how to play the game. Whoever comes next, doesn’t.