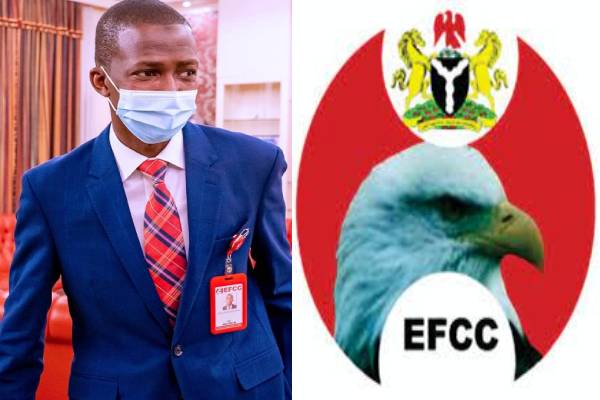 The Economic and Financial Crimes Commission says it has 59 people on its wanted list for various fraudulent transactions totaling 435 billion naira and $397,758,000 (about 165 billion naira).

In a statement signed by Wilson Uwujaren, the commission’s head of media and publicity, photos of the wanted suspects and details of their alleged offenses were posted on the commission’s website.

He urged anyone with information on the whereabouts of the above-mentioned persons to contact any of the commission’s offices, as well as the nearest police station or other security services.

The most serious offense on the list was that of a Maxwell, who was wanted by the EFCC in an alleged case of conspiracy, obtaining money by deception and money laundering totaling N213 billion.

He ran a trading and finance company where funds from many investors were trapped.

A former personal assistant to a former Governor in Kwara State has also been accused of signing and laundering N12 billion belonging to the state government. The suspect was charged with violating the commission’s bail conditions and remained incommunicado.

He would have received the sum for the purchase of equipment for the Nigerian army. It was later discovered that there were discrepancies in the supply of equipment.

Additionally, a native of Plateau State, identified as Noel, has been declared wanted in a case bordering on conspiracy, theft and money laundering to the tune of N131 million. He is said to have been a former staff member of the First City Monument Bank in Birni Kebbi, Kebbi State.

A man named Oluwole is wanted for allegedly receiving $158,000 in illegally imported apples from a South African company. He allegedly refused to pay for the goods.

In a related development, a female banker in Ondo State allegedly forged a client’s documents and fraudulently obtained a N27 million loan facility using the client’s fixed deposit as collateral for the loan. In addition, another female banker from Ogun State allegedly forged a treasury bill certificate worth N27 million and handed them over to a client in exchange for the cash.

An Israeli, identified as Doron, was also said to be wanted for obtaining money under false pretences, theft and counterfeiting. A woman is also on the list for collecting aircraft parts worth $1.4 million from a Russian company and evading payment. She was allegedly involved in another billion naira fraud.

Some of the cases are already before the courts while others have skipped the administrative bail granted to them by the EFCC.

Meanwhile, the committee’s chairman, Abdulrasheed Bawa, said in the March edition of EFCC Alert, the monthly electronic magazine published by the agency’s media unit and received by our correspondent, that the panel was not controlled by anyone.

He noted that the EFCC deployed intelligence in its operations and that all of its cases were bailable offences.

He described the prevalence of cybercrime among young people as worrying.