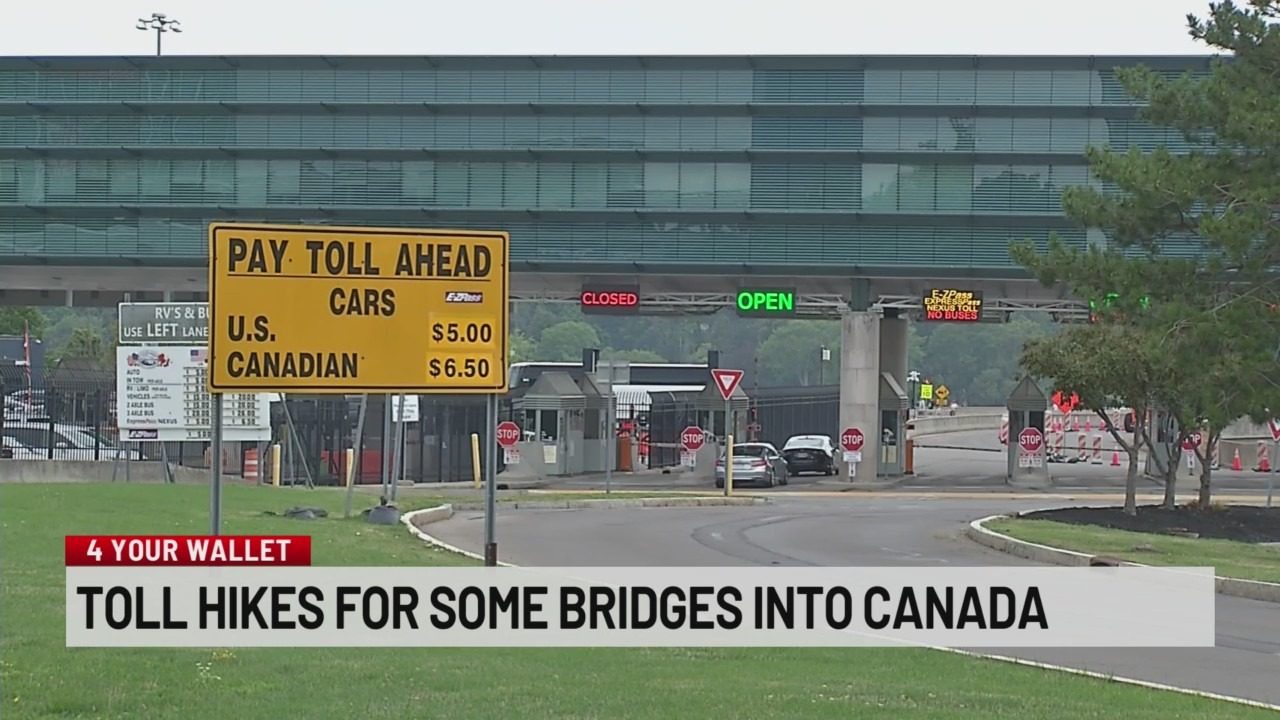 These toll hikes went into effect Monday without prior warning, notice or public input from the Niagara Falls Bridge Commission.

The Commission said the rate hikes were necessary to try to recover money lost during the pandemic.

Congressman Brian Higgins is unhappy with the toll hikes and the way they were rolled out.

Toll rates have been increased at all levels at the Rainbow, Whirlpool and Lewiston-Queenston bridges. Fares at the Peace Bridge were not affected, as it is governed by a separate bridge commission.
Toll increases are now in effect for buses, RVs, limos and trucks, but most people will likely notice the toll increase for cars from $4 to $5.

A woman swims across Lake Erie from Canada northeast to Pennsylvania.

The Niagara Falls Bridge Commission voted on the toll hikes last week on July 25, and the new rates went into effect a week later on August 1, with little or no notice.

“There should have been a public hearing, a public notification and a public hearing, so people could weigh in and I think you know you would get from that better information as to where the real problem exists,” he said. said Higgins, “I would say the best response would be to increase and work with the Canadian-US government to lift all the Covid restrictions that currently exist, we have a high level of vaccination rates for both people from the United States and Canada.

Higgins has been highly critical of the US and Canadian governments in their handling of border restrictions during the pandemic. He repeatedly called on Canada to remove testing requirements and use of Canada’s ARRIVECAN app, calling it a hassle.

According Niagara Falls Bridge Commission documents, car traffic to Canada decreased by 73% in 2021 compared to 2020, due to border restrictions. Westbound – toll pay – car traffic is down 67% in 2020 due to Covid. The vast majority of local bridge government revenue comes from tolls.

The NFBC released this statement:

“The NFBC recently increased toll rates at the three Niagara Region border crossings operated by the Board. As the NFBC does not make annual toll increases, this change reflected economic conditions and reduced operational revenues due to pandemic traffic reductions and inflationary impacts. Toll rates at NFBC border crossings remain at or below average toll rates at other comparable border crossings between the United States and Canada. This increase came into effect on August 1, 2022, following approval by the Commissioners on July 25, 2022.”

Higgins says the toll hikes will be an added deterrent to people crossing the border. Peace Bridge executive director Ron Reinas said there were no plans to raise tolls there.

Reinas in a phone conversation says he is not surprised by the fare increases and notes that compared to other bridge crossings, local fares are still much lower. Reinas says the bridge is not operating with a deficit or loss due to the pandemic, but is still operating with a slight surplus.

Paul Wozniak from Niagara Falls says he has family in Canada and says he would prefer not to have to follow all the requirements to enter Canada.

“Back then it was so easy you didn’t need anything you just go now you gotta go and have special things special that I’m all boosted and Covid everything that you’re still going to get problems,” Wozniak said.

He wonders where the toll money is going.

The cost is the same for E-ZPass, ExpressPass, Nexus/Toll or In Tow per Axle.

Commercial: As follows below.

The latest toll rates can be found here.

Jeff Preval is an award-winning presenter and journalist who joined the News 4 team in December 2021. See more of his work here.