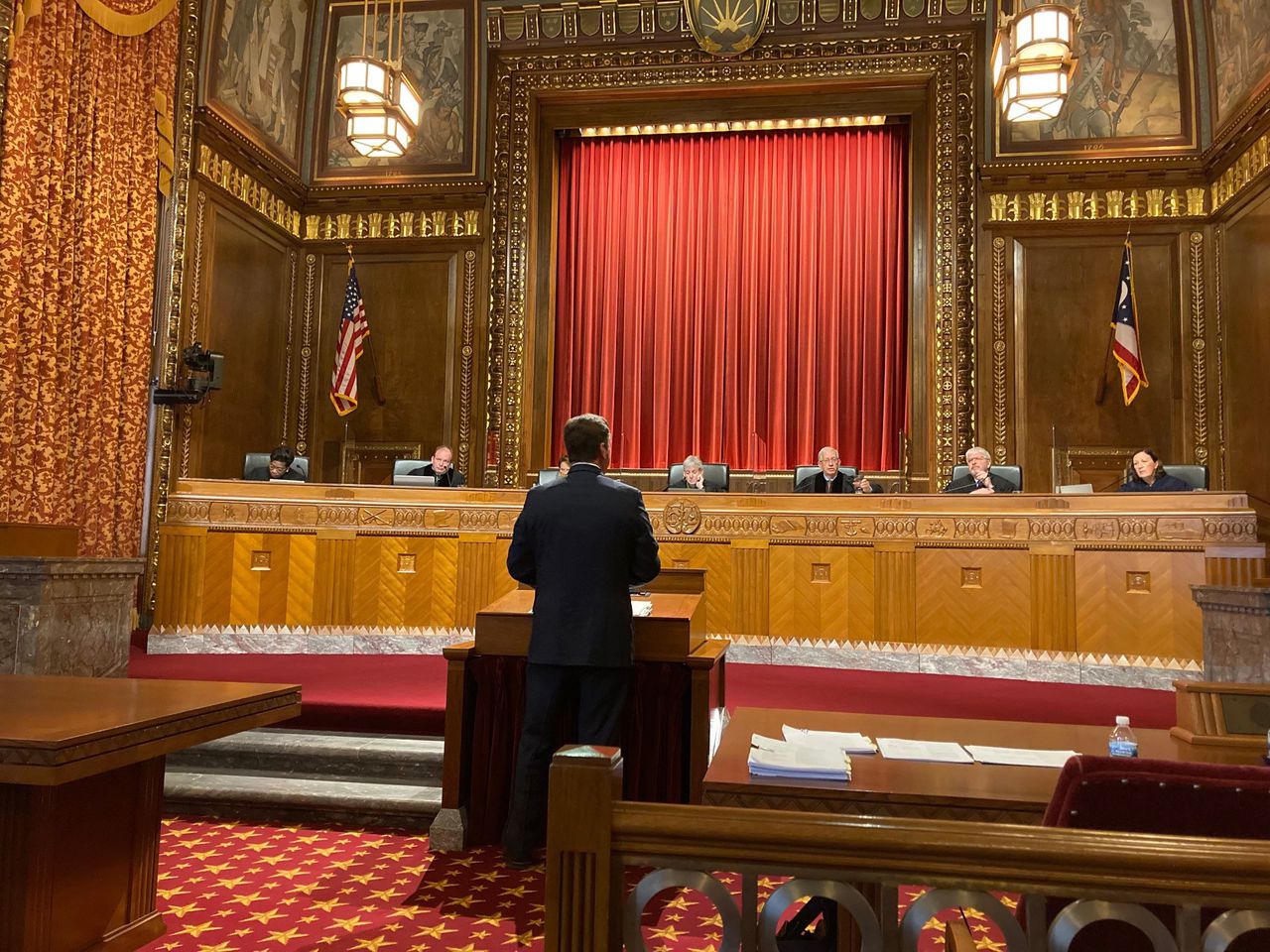 Rumbles from the rotunda

Make me a card: For the second time in a week, the Ohio Supreme Court has dismissed a political map drawn by Ohio Republicans as an illegal gerrymander. As Andrew Tobias writes, the Ohio Supreme Court, in a 4-3 decision on Friday, said the map, which favored the GOP to win a 12-3 share of Ohio’s congressional seats, unduly favored Republicans while unnecessarily dividing Cuyahoga, Hamilton, and Summit counties. As in the previous ruling overturning the Ohio state legislative maps, Republican Chief Justice Maureen O’Connor joined the court’s three Democrats as a swing vote. The constitution gives lawmakers 30 days from the court’s decision to propose a new map.

Democrats rejoice: Ohio Democrats in Congress who were disadvantaged by the cards welcomed the decision, reports Sabrina Eaton. “The state-approved redistricting maps were clearly drawn for maximum partisan advantage,” said a statement from U.S. Representative Shontel Brown of Warrensville Heights, which represents one of the Democratic safe seats. “Now the state must listen to the will of the people of Ohio, who overwhelmingly supported an amendment to the state constitution in 2015 to reform redistricting and make it fair. I hope they remember that voters are supposed to choose their representatives, not the other way around.

Back to work: The Ohio Redistricting Commission will meet at 10 a.m. today to begin the task of drawing a new set of state legislative maps. As Tobias writes, a Sunday statement announcing the meeting said, among other things, that the seven members of the commission would have access to each other’s aides and consultants. The seven members of the commission will remain the same, with one exception: State Rep. Allison Russo, elected last week by her colleagues as the new House Minority Leader, will replace the state Rep. Emilia Sykes.

Relay silver: The U.S. Department of Transportation announced Friday that Ohio will receive $483.3 million over the next five years to repair deteriorating bridges under a new program established by the bipartisan infrastructure bill. that Congress approved last year, writes Eaton. In fiscal year 2022, Ohio will receive $96.7. million.

Pedagogical theory: Governor Mike DeWine thinks unpleasant chapters of American history should be taught honestly, but he’s against critical race theory, or anything that makes minority students feel victimized and white students feel guilty. Laura Hancock writes about her views, which are a theme of the Republican gubernatorial primary, and how other history and education experts disagree.

supreme candidate: Jim Obergefell, who was the lead plaintiff in the U.S. Supreme Court case that legalized same-sex marriage nationwide, has returned to his native Sandusky and plans to announce an election race at 9 a.m. today. Obergefell sued the state of Ohio to have his name listed as a ‘surviving spouse’ on the death certificate of his wife, John Arthur, whom he married in Maryland at a time when same-sex marriage was not was not legal in Ohio. Gannett’s Laura Bischoff reports that he will run for a seat in the Ohio House of Representatives.

Off-grid: A new audit from the Public Utilities Commission of Ohio released on Friday found no evidence that the roughly $500 million FirstEnergy collected from customers for grid upgrades resulted in increased grid upgrade spending. In fact, as Jeremy Pelzer reports, FirstEnergy didn’t track how the money was spent, so auditors couldn’t tell if any of the money was used to help make pass the outrageous Bill 6.

My ears are burning: If this audit sounds familiar, it’s because the now-fired FirstEnergy CEO bragged that former PUCO chairman Sam Randazzo “burned” the final report of an earlier investigation into the same issue. . A draft version of that earlier audit suggested that if released, it would contain much tougher recommendations than those made in Friday’s audit, including restricting FirstEnergy’s dividend payments and requiring that a portion of the fees is actually spent on modernizing the network.

To extinguish ? : An Indiana coal-fired power plant that Ohio taxpayers are paying millions of dollars to subsidize through House Bill 6 may soon close as the U.S. Environmental Protection Agency seeks to no longer exempt it from environmental rules regarding the disposal of coal ash. As Pelzer writes, the owners of the Clifty Creek power plant told the EPA that they would be forced to shut it down if the EPA’s decision becomes final.

No report for you: The Maryland Utilities Regulatory Commission has quashed an attempt to force FirstEnergy Corp. to release the full findings of an internal investigation related to the House Bill 6 scandal that led to the dismissal of top company executives. As Pelzer reports, the Maryland Public Service Commission’s Jan. 6 decision is the latest rebuff in attempts by consumer advocates to force the release of the full investigative report, which uncovered a previously secret payment. $4.3 million to Randazzo.

Portman visits Ukraine: US Senator Rob Portman, a Republican from Ohio, is traveling to Ukraine with a bipartisan group of colleagues to meet with President Volodymyr Zelenskyy and other Ukrainian officials. “Ukraine continues to defend its territorial integrity against an increasingly aggressive Russia, while working to implement critical domestic reforms to consolidate its democracy – it is more important than ever that the United States support the Ukraine in its efforts,” Portman said in a statement.

Five things we learned from the May 17, 2021 financial disclosure form from State Representative Jessica Miranda, a Democrat from Forest Park.

Straight from the source

“Everything that happens in elections happens, but it was a crucial moment in our history. And I had an obligation to listen, which I did, to consult and then to make decisions that I thought it was in the best interest of the people of Ohio.

-Governor. Mike DeWine, who told The Associated Press he has no regrets over his response to the coronavirus pandemic.

Capitol Letter is a daily briefing providing succinct and timely information for those who care deeply about decisions made by state government. If you are not already a subscriber, you can register here to receive free Capitol Letter in your e-mail box every day of the week.