The Broadway redevelopment plan has been changed to further reduce congestion 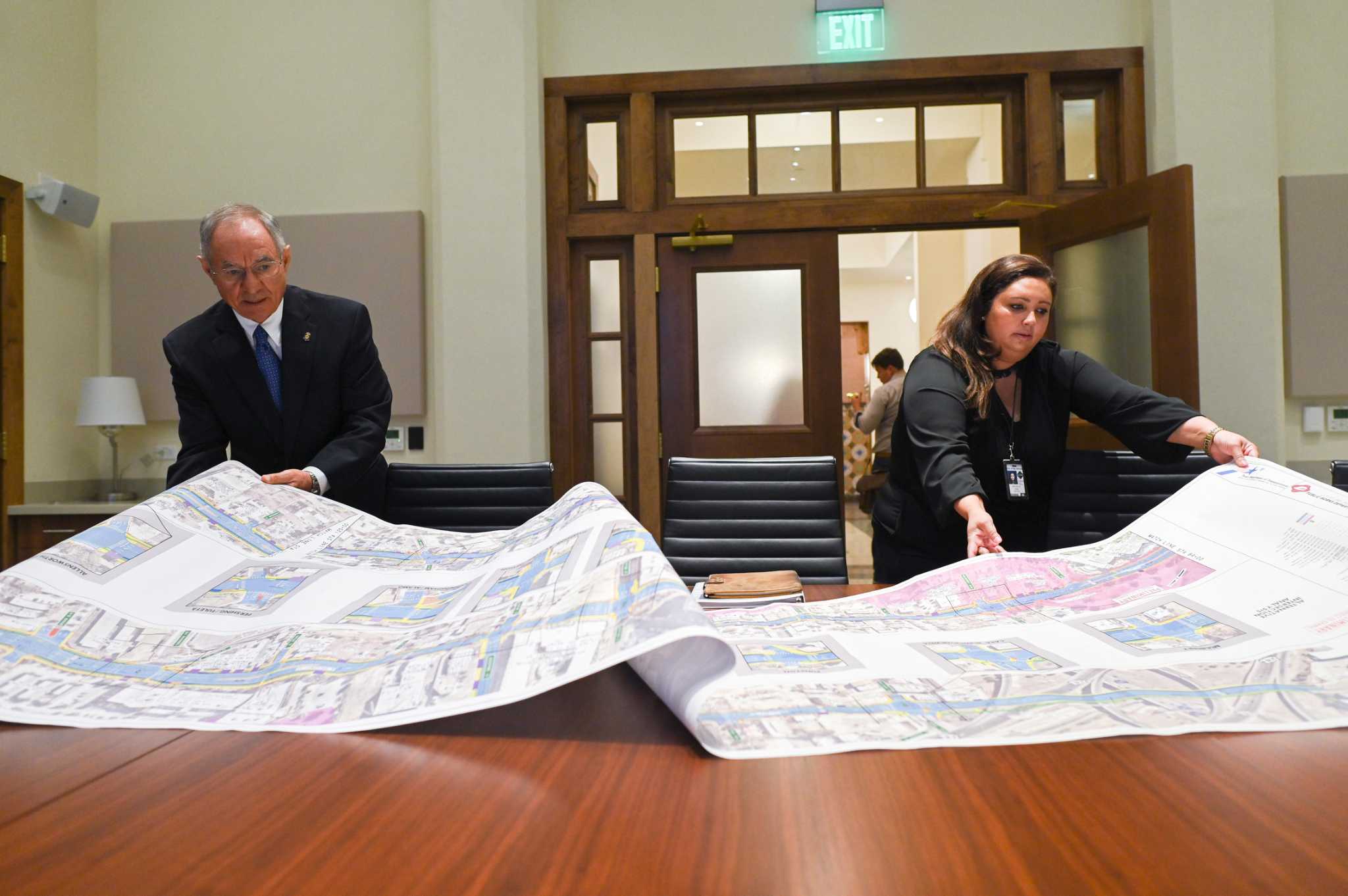 In a late-hour effort to appease the state, the City of San Antonio has fine-tuned its voter-approved plan to redevelop Broadway from the Pearl to the University of the Incarnate Word by further improving intersections along the corridor to facilitate circulation and reduce congestion.

Like the city’s original plan, the new plan would reduce the road from six to four lanes of traffic and add wider sidewalks and protected bike lanes. Those details proved a sticking point in January for San Antonio banker J. Bruce Bugg, chairman of the Texas Transportation Commission, who raised fears of future congestion by leading a 3-1 vote to cancel the 2017 bond project.

The vote abruptly scuttled years of coordination between the Texas Department of Transportation and city officials on the project.

In June, City Manager Erik Walsh and Mayor Ron Nirenberg briefed Bugg and TxDOT Executive Director Marc Williams on the city’s new plans. Unlike its previous plan, the city’s updated plan does not rely on its own traffic data — which TxDOT rejected — nor does it assume that anyone will park their vehicle and start walking or cycling after the redevelopment of the road.

Instead, the city now uses the state’s own traffic data, Walsh said.

This is a carousel. Use the Next and Previous buttons to navigate

“It was part of the strategy,” Walsh said. “We’re just going to take all their assumptions. We’ll make some improvements to intersections, but we won’t get into that debate about, well, “Thirty percent cyclists and 5 percent pedestrians.” No. We’ll just take your traffic counts and do it.

As of Tuesday, TxDOT still hadn’t given the city the green light to move forward.

“Implementing a reduced-capacity design runs counter to TxDOT’s focus on tackling congestion not just in San Antonio but across the state of Texas and, therefore, inconsistent with operational purposes of this busy public road,” Bugg said in a written statement Tuesday.

But he did not rule out the possibility of reaching an agreement with the city.

“TxDOT received the city’s proposal, and while we disagree with the findings to reduce the lanes from six lanes to four lanes, we believe this creates an opportunity for continued conversations,” Bugg said.

The stalemate came after years of planning by the city to spruce up the corridor and make it safer.

In 2014, TxDOT, strapped for funds, sought to push maintenance of some roads into cities. San Antonio agreed to take control of a 2.2-mile stretch of the Broadway corridor. That year, the commission transferred the route—formerly known as State Loop 368—to the city.

However, the commission placed another order about two months later, indicating that the transfer would take place when the state issued a letter of acceptance of the project. It never happened.

Last year, Razi Hosseini, director of the city’s public works department, received an unsigned document from TxDOT agreeing to contribute nearly $5 million towards a “comprehensive rehabilitation of street pavement, including a reduction lanes from 6 to 4 lanes and the addition of bicycle and pedestrian facilities”.

The redevelopment would double the width of the sidewalks on Broadway from 4 feet to 8 feet and create a separate 5-foot bike lane. Other improvements — a reduction in access roads, the construction of a median strip limiting left turns — would make it possible to make traffic more fluid.

Less than a month later, TxDOT told Hosseini that the state would not allow the project to go ahead.

Explaining the decision, Bugg cited a request from Governor Greg Abbott to “execute congestion relief for residents across the state of Texas.” Reducing traffic lanes on Broadway “would be in direct conflict with our clearly stated policy to relieve congestion,” Bugg said at the commission’s meeting in January.

By then, the city had already spent approximately $4 million to design the first phase of the upper segment of the project.

The city’s new design, while not budging on the narrowing of traffic lanes, accepts the state’s projection that traffic on Broadway will grow about 3% per year for the next two decades.

The city’s plan would still lighten traffic even more than its original forecast, Walsh said — by eliminating more left turns and synchronizing traffic lights, among other tweaks.

“We want to make sure that we don’t give them any reason to say, ‘Your design is different from ours,'” Hosseini said Tuesday.

Meanwhile, the city still holds nearly $7 million in bonds for the project. But municipal authorities could eventually reallocate the funds.

“There’s no deadline, but we don’t want to issue debt and spend money,” Walsh said. ” We waited. And the board resumes in August, and I owe everyone an update.

“We had a project that we presented to voters and they overwhelmingly supported it,” Sanchez said. “If there comes a point where TxDOT gives us a firm no on this, we have no choice but to step aside and reallocate those dollars to other projects. That would be a shame.”