The pope at the Protection Commission: all abuses are unacceptable 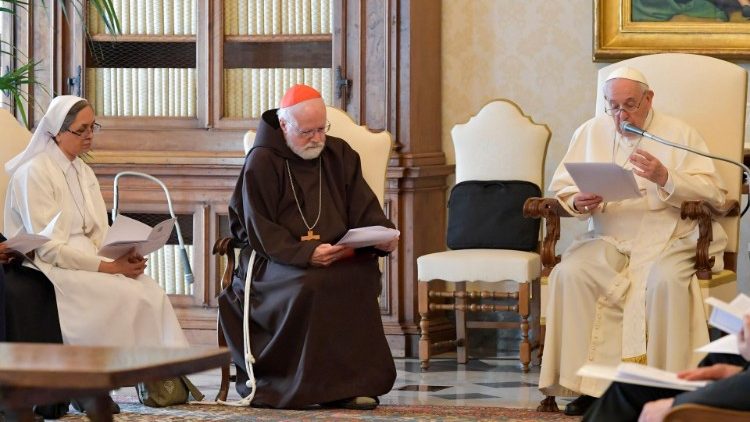 Addressing the Pontifical Commission for the Protection of Minors, Pope Francis calls for an annual report on the Church’s safeguarding initiatives to help relevant authorities respond to allegations of abuse by clergy, and welcomes the work done by the Commission.

Pope with Pontifical Commission for the Protection of Minors (Vatican Media)

By Deborah Castellano Lubov
Abuse in any form is unacceptable.

This was at the heart of Pope Francis’ address on Friday morning before the Pontifical Commission for the Protection of Minors following their plenary meeting.

The pope denounced clerical sexual abuse and underlined the individual responsibility of each member of the Church to prevent abuse and work for justice and healing. The Holy Father also expressed his direct availability to the Commission, to ensure that it retains its freedom to help and to act.

He also asked the Commission to provide him with an annual report on the Church’s initiatives for the protection of minors and vulnerable adults, in an effort to ensure greater transparency and accountability.

Direct access from the Commission to the Pope
In the long-awaited Apostolic Constitution on the Roman Curia Evangelium Predicate published on March 19, the Pope has given the Pontifical Commission for the Protection of Minors special significance and importance by placing it under the responsibility of the Congregation for the Doctrine of the Faith.

At the time, Commission Chairman Cardinal Sean O’Malley, Archbishop of Boston, welcomed the decision to maintain the Commission “as a separate body within the Dicastery that enjoys direct access to the Holy -Father and with its own management and staff.”

Welcoming the Commission, the Pope thanked Cardinal O’Malley and all his members for their commitment to protecting children, saying that “thanks to your efforts, minors and vulnerable people are safer in the Church.”

The Church Must Be Totally Trustworthy
The Pope reminded the Commission that the service entrusted to them must be carried out with care.

“Constant attention is required on the part of the Commission so that the Church is not only a safe place for minors and a place of healing, but can prove completely trustworthy in the promotion of their rights in the whole world”.

The pope denounced situations that continue to exist where the dignity of children is threatened. “This must be a source of concern for all the faithful and for all people of good will.”

Child abuse is serious and ongoing
The pope went on to lament the everlasting effects of sexual abuse.

“Abuse in any form is unacceptable. The sexual abuse of children is particularly serious, as an offense against a life that is just beginning to blossom. Instead of thriving, those who are abused are deeply hurt, sometimes permanently.

The Holy Father recalled a letter from a father whose son had been abused and therefore for many years could not even leave his room, decrying how profound the effects were on the son and also on family. “Those who have been abused sometimes feel almost trapped between life and death. These are realities that, as painful as they are, we cannot take away,” he insisted.

The Pope encouraged them to continue “diligently and courageously to make these wounds known”. He said it involves seeking out those who still suffer and recognizing in those people the testimony of our Savior who suffered.

“This is the path that we must all take: bishops, religious superiors, priests, deacons, consecrated persons, catechists and lay faithful. Each member of the Church, in accordance with his or her state, is called to take responsibility for preventing instances of abuse and for working for justice and healing.

Never lose your freedom
Speaking of the fact that he formally instituted the Commission within the framework of the Roman Curia, within the Dicastery for the Doctrine of the Faith, the Pope observed: “Someone might think that this could jeopardize your freedom of thought and action, or even depriving yourself of the importance of the problem you are dealing with. »

“That’s not my intention, nor my expectation,” he said. “And I urge you to make sure that doesn’t happen.”

“I have made your leadership and staff distinct, and you will continue to communicate directly with me through your Deputy Chairman.”

The Holy Father called on them “to propose better methods to enable the Church to protect minors and the vulnerable and to help in the healing of survivors, in recognition that justice and prevention are complementary. Indeed, your department brings a proactive and forward-looking view of best practices and procedures that can be implemented throughout the Church.

A new beginning with the Apostolic Constitution
The pope said important seeds had been sown, although “much remains to be done”.

“The Apostolic Constitution marks a new beginning. It is your responsibility to expand the scope of this mission so that the protection and care of those who have suffered abuse can become the norm in all areas of church life. Your close collaboration with the Dicastery for the Doctrine of the Faith and with the other Dicasteries should enrich your work, while your work can in turn enrich that of the Curia and the local Churches. »

Speaking off the cuff, the Pope underlined the independence of the Commission.

“Even though the Commission on the Scheme of the Roman Curia is part of the Dicastery, it is independent, with a president appointed by the Pope. Independent.”

The duty to protect young people and the vulnerable, the pope suggested, “is based on the conception of the human person in his intrinsic dignity, with particular attention to the most vulnerable,” and requires concrete collaboration.

Transparency factor so that the authorities can act
The Holy Father welcomed that the seeds that have been sown are beginning to bear good fruit, noting, “Cases of abuse of minors by clergy have been declining for several years now in parts of the world where reliable data and resources are available. available.”

“I would like you to prepare an annual report for me on the initiatives of the Church for the protection of minors and vulnerable adults. It may be difficult at first, but I ask you to start where it is needed, to provide a reliable account of what is being done and what needs to change, so that the relevant authorities can act.

This report, the pope said, “will be a driver of transparency and accountability and – I hope – will provide a clear audit of our progress in this effort.”

Without this progress, the pope acknowledged, “the faithful will continue to lose confidence in their pastors, and the preaching and witnessing of the Gospel will become increasingly difficult.”

Attend episcopal conferences
Addressing the “immediate needs” for the welfare and pastoral care of people who have suffered abuse, the Pope said he has followed with interest the ways in which the Commission has always offered opportunities to listen and meet with victims. and the survivors, claiming that they helped him in his pastoral mission.

“That is why,” he said, “I urge you to help the Episcopal Conferences — and this is very important: help and supervision, in dialogue with the Episcopal Conferences” — to create appropriate centers where people who have been abused, and their family members, can find acceptance and attentive listening, and be accompanied in a process of healing and justice. »

“Remember the Summit we had almost three years ago with the presidents of the [world’s] episcopal conferences. They must set up the commissions and all the means to carry out the procedures for taking charge of the abused with all the methods at your disposal and also those of punishing the aggressors. You have to supervise this. I insist. Please.”

Pope Francis concluded by offering his sincere thanks for their work. “You are in my prayers and I ask you to keep me in yours. Thank you! May God continue to shower his abundant blessings upon you,” he said.–Vatican News