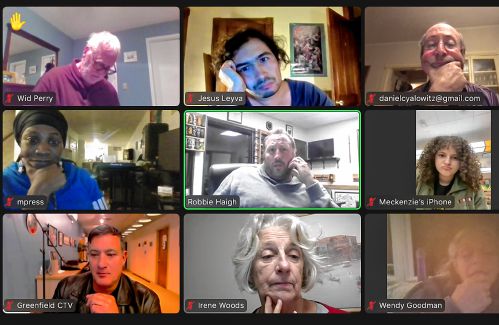 GREENFIELD — Members of the Human Rights Commission met Monday evening with Chief of Police Robert Haigh Jr. for a conversation about how to move forward following the race discrimination lawsuit involving the department and a former policeman from Greenfield.

“I was invited tonight, and I thank the president and the commission for allowing me to be here,” Haigh began. “I don’t think any of this is easy for you in any way. I know it’s not for me and I know it’s not for our ministry and our community. I am ready to be here, to listen and to respond, and to be silent when you want me to be too.

Monday’s conversation began with a discussion about identifying a replacement for former Greenfield police officer Laura Gordon, who served as a liaison between the police department and the Human Rights Commission. Gordon is now a full-time officer at Erving.

“At the moment we don’t have any volunteers for the position,” Haigh told the commissioners. “We will fill it – hopefully not by my order or that of the deputy chief; hopefully someone will step in and want to fill that (role).

He said it was important to him that “the right person” be appointed.

“I don’t want to just… throw somebody in there who doesn’t want to be there,” Haigh said.

Following a question from resident Jesus Leyva about Haigh’s past decision to keep the then sergeant. Daniel McCarthy as a liaison for the Police Department’s Human Rights Commission Despite the 2015 controversy surrounding the Confederate flag in his garage, the conversation morphed into a larger discussion about racism and the way forward for Haigh, the department and the community.

In May, a Hampshire County Superior Court jury found that Haigh and the police department racially discriminated against former officer Patrick Buchanan when he was denied a promotion to 2014, an announcement that led members of the public to call for Haigh’s resignation.

“I was on the Human Rights Commission and was asked about McCarthy at the time,” At-Large Advisor Penny Ricketts said, looking back at the 2015 controversy. “Instead from just saying, ‘No, I don’t want him in these meetings anymore’, I said I wanted him to stay….I felt like he had done something so wrong…the best place for him was at the Human Rights Commission on a monthly basis.Why turn your back and ignore people after that, when you think it’s important that he understands how much the community was suffering?

She credited Haigh, a person she knows “for a fact is not racist,” for the way he stepped in after McCarthy’s eventual departure from the commission. Ricketts also praised Haigh for how the department “stepped up” after racist Photoshopped images of her were sent to city department heads in 2016.

Commissioner Wendy Goodman, however, disputed Ricketts’ statement that she knows “for a fact” that Haigh is not racist.

“It was your experience,” she said. “I would encourage you to say you haven’t experienced racism, rather than saying you know he’s not racist.”

Goodman argued that other members of the community experienced Haigh’s behavior “through a racist lens”.

“That doesn’t mean you’re a racist; it is to say that certain behavior towards them is racist,” she said.

Goodman asked his fellow commissioners what their way forward might be. She noted the difficulty of finding community members to fill vacancies at the Human Rights Commission and a police officer to fulfill the liaison role. Goodman herself announced her intention to resign.

“I’m not blind to the fact that there is racism everywhere,” Haigh said, responding to Goodman’s comments. “You can do something without even realizing it, and I understand that. That’s why I need people other than me to understand.

He said since filing the discrimination complaint in 2015, he has tried to push the department forward.

Haigh expressed support for an outside person to audit the department and its policies. In September, the city council filed the mayor’s request for $175,000 to fund an independent audit, after discussion that changed the request to $100,000.

“I’ll defend myself all day against what I’m being accused of, but I’m not naive enough to believe we don’t have potential issues,” Haigh said.

Commissioner Mpress Bennu said Goodman’s response to Ricketts’ statement “struck a chord” with her. She argued that Haigh “shouldn’t have to bow down” to come off as a racist if he knows he isn’t.

“If he recognizes that a wrong has been done and he is doing what he is supposed to do, as chief of police, trying to bring this community together, why can’t we, as community, support it?” she says. “The negativity is just disgusting.”

Resident Peg Hall, referring to comments Haigh made to the Greenfield Recorder, said that rather than denying the charges against him in relation to the trial, he should focus more on changes that can be made to the coming.

“I think…a little more humility and a discussion of ‘things can always be done better and here’s the kind of stuff we have in mind,’ would be more helpful,” she said. .

Another resident, Caroline Bruno, said she hoped to focus more on the concept of racism as an institutional framework.

“I think talking a little less about personal experience is an opportunity to look at well-documented wrongdoing,” she said. “The whole court case was a very long process of coming to terms with a very large number of wrongdoings. … Due to these (wrongdoings) being clearly documented and well discussed throughout this trial, it appears that there is an opportunity to act now rather than just start another investigation.

Commissioner Wid Perry, who was among the last to comment, said difficult conversations and “raw emotions” are how we learn.

“That’s how we move forward,” Perry said. “We listen, we hear, we make mistakes and we improve. That’s what it’s about. We cannot change what happened before; all we can do is get better.