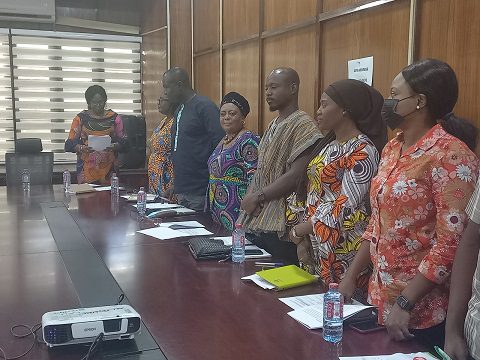 A five-member audit committee was inaugurated by the Land Commission to promote efficient use of public funds and state resources.

It is a statutory committee established under the Public Financial Management Act 2016 (Act 921) to promote transparency and accountable governance of financial management systems within the Commission.

Mr. Joseph Winful, Chairman of the Internal Audit Agency, chairs the Committee, which will, among other things, carry out the responsibilities conferred upon it under Section 86(1) of the Audit Management Act. Public Finance, the Public Procurement Act 2003 (Act 663) as amended, the Guidelines for the Effective Operation of the Audit Committee and other applicable financial laws.

The committee should also work closely with the management of the Lands Commission and the internal audit unit to resolve internal financial issues, financial control mechanisms and processes within the Commission.

According to him, the responsibilities of the audit committee under the laws of the country had been categorized into three main areas, mandatory roles, advisory roles, support to internal audit unit and other internal control units. and external control.

Mr. Alex Quaynor, National Chairman of the Commission, pledged the support of management and the Board of Directors to the members and assured them that matters concerning staff remuneration, which were critical, would also receive the necessary attention in order to that the staff can give the best of themselves.

Mr. Dadson, the Executive Secretary, for his part expressed his optimism that the members of the Committee had the skills and knowledge required to carry out its mandate.

Mr. Winful, Chairman of the Committee, also a business consultant with more than 38 years of experience, thanked the management of the Commission for the confidence placed in him and pledged to work diligently with the rest of the members to achieve his Goals.