Two seats on the Civil Service Commission are open, but only one race is contested 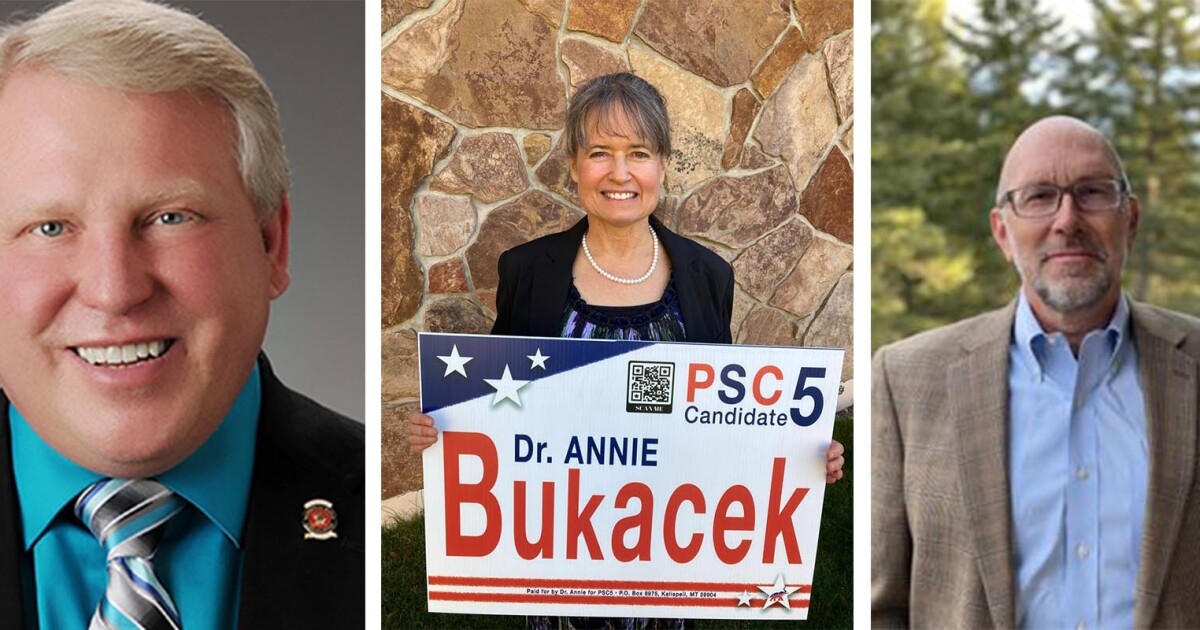 Two seats on the Montana Public Service Commission are up for election this fall. An incumbent is running unopposed for one of the seats, and two candidates are competing for another seat on what is currently an all-Republican council.

The PSC is a government agency that sets rates and regulates electric utilities in the state.

For about $110,000 a year, Montana’s public service commissioners commit over four years to balancing the interests of the company with the needs of customers served by public services. With no challenger on the ballot, incumbent Republican Randy Pinnoci is poised to retain the District 1 seat representing northeast and north-central Montana.

Prior to joining the PSC, Pinocci served a term at Montana House and served as a board member for the Montana Shooting Sports Association. According to his biography on the PSC website, he has business experience in political direct mail printing. Pinocci did not respond to YPR’s interview requests.

During his first term, he spoke at PSC meetings about his concern about NorthWestern’s lack of own resources, which he is filling through various means, including buying power on the wholesale market. .

“I encourage the taxpayer to encourage NorthWestern to increase the amount of power it produces through more of Colstrip, by putting in a hydroelectric dam, by putting generators in dams that don’t have one,” Pinocci said at a September conference. PSC meeting.

In August, he co-signed a letter with another commissioner that said the “likely lack of power” would lead to “blackouts” in eastern Montana this summer. The letter says the threat of power shortages is one of the reasons lawmakers are rallying behind the Colstrip coal-fired power plant. While possible, none of Montana’s largest utilities have indicated that brownouts and outages are likely.

Pinocci recently made headlines for suggesting at a PSC meeting that Missoula customers would be exposed to loss of power if the state experiences brownouts.

“Maybe Missoula is the one to turn off,” he said. “I think if it happens in 20 below, they will have a very different attitude.”

The PSC itself has made headlines in recent years for disagreements between commissioners, workplace bullying and a poor financial audit that exposed evidence of financial mismanagement. The PSC has released a strategic plan to address results, and it’s a talking point this year for candidates.

Democratic candidate John Repke says the audit is a priority he would work on if he won the District 5 seat.

“It’s a tough environment to retain and develop staff, so one of the things I want to accomplish is to make the agency a place where top-notch people want to work, so Montanans can really be represented. “said Repke.

Commissioner Brad Johnson is stepping down from the District 5 seat and leaving behind the only competitive all-Republican commission seat in about a decade. Repke faces Republican Ann Bukacek in the race for District 5, which represents Lewis and Clark, Flathead, Lake and Teton counties.

As commissioner, Repke tells YPR that he would strive to assess rate changes and other elements using an objective, fact-based approach.

Repke has a background in finance. He worked for over a decade in waste management and was a financial administrator at a large supply chain company.

“It’s worth emphasizing that this job is primarily about balancing the economics of regulated utilities with those of customers, so it’s the experience that matters.”)

Repke says he thinks the country is on the cusp of changing the way energy is generated and used, and Montana is at the forefront.

“The cost of alternative energy sources goes down as the efficiency of these technologies increases dramatically, so we’re going to see changes mostly driven by technology,” he said.

Repke competitor Kalispell doctor Anne Bukacek did not respond to YPR interview requests for this story, but in a campaign video she defends coal and hydropower, which she calls the ultimate green energy source: “Fortunately, Montana has abundant natural resources to generate enough energy to meet consumer needs, even as our population in Montana grows in size.

According to her website, she was endorsed by the Montanans for limited government and Republican Central Committees in all 5 district counties. Like Pinocci, Bukacek is politically conservative and also served on the board of the Montana Shooting Sports Association. She was a member of the Flathead Health Board from 2020 to 2022, during which – her website says – she “played an instrumental role in the battle against the lockdown in the Flathead”.

If elected, Bukacek will join an all-GOP regulatory council. A Democrat has not been elected to the Civil Service Commission in over a decade.