Wadestown Fair Building gets a lift with grant funds 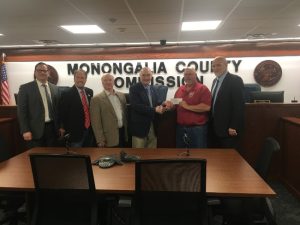 Delegate Joe Statler, R-Monongalia, and Delegate Dave Pethel, D-Wetzel, passed on $10,000 of the grant and $25,000 each was donated by Senator Charlie Clements, R-Wetzel, and Mike Maroney, R -Marshall.

“This is the biggest we’ve written (the check) so far and we’re glad it’s a good thing for this part of the community,” Clements said.

Clay-Battelle FFA Alumni Association president Keith Watson said the existing barn was built in 1927 and, in his own words, “is a bit tired”.

The proposed wood-framed, steel-skinned barn would have 11,500 square feet of space with a large cattle show ring. The building would also have utilities and WIFI allowing it to host other FFA or 4-H events.

“Just for the building envelope, we’re at close to $278,000 and with the concrete, electrical and plumbing we need, we’re trying to keep that under $500,000 for this building.”

The Monongalia County Commission has also agreed to allocate $150,000 to the project, and that number could change as needed.

Delegate Statler is one of the founders of Monongalia County Fair Livestock Show and Auction and a longtime participant and supporter of agriculture in the county. Statler said he is open to considering additional grants in the future.

“It’s really a project that the community feels they want and need,” Statler said. “We also get that money every year, so we can watch as we go and see if there’s another commitment we can make later.”

The new barn will support the farming activities of FFA and 4-H members locally and throughout the region with a 1,700 square foot display area. But upgrades to utilities and technology could make other community events viable.

“It could be used for anything after that — the fall festival they have there, the craft shows that might be there, or any agricultural industry,” Watson said. “The building would be set up and established and you could have different shows throughout the year.”

Statler said the FFA and 4-H programs that are offered give young people the skills to be productive members of the community. Program leaders teach skills that can be used or even marketed as young people mature and figure out what their career might be.

“Last week I was there and they were painting a trailer and a car,” Statler said. “They were patching it up and painting it themselves, the students.

Watson hopes to raise the necessary funds and announce a schedule for the demolition of the existing and the construction in July. The fairground would be in use until September this year, but Watson is confident the new building could be ready for the fair next year if the money is raised.